This article is based on the review “Vitamin D Deficiency and Possible Role in Multiple Sclerosis” by Michael F Holick, Stuart Cook, Gustavo Suarez, and Mark Rametta, which was published in European Neurological Review, in 2015. DOI: http://doi.org/10.17925/ENR.2015.10.02.131

Vitamin D, the “sunlight vitamin”, is made in the skin following exposure to ultraviolet (UV) radiation from the sun. It is a fat-soluble vitamin that is naturally present in very few foods. Good food sources are oily fish (such as salmon, sardines, herring and mackerel), red meat, liver, egg yolks and fortified foods including most fat spreads and some breakfast cereals.1 However, for most people, the majority of their vitamin D is made from the action of sunlight on their skin or from supplementation.

Vitamin D is converted by the body to 25-hydroxyvitamin D (25[OH]D) and it is this metabolite that is measured to determine a patient’s vitamin D status. As shown in the figure below, the recommended dietary allowance (RDA) ranges from 400 to 800 International Units (IU)/day, as advised by the Institute of Medicine (IOM), to maintain blood levels of 25[OH]D of at least 50 nmol/L (20 ng/mL). The exact RDA is dependent on the person’s age. It is important to note that these recommendations are based solely on the skeletal effects of vitamin D deficiency, the first effects to be recognised. To achieve the additional benefits of vitamin D, many clinical studies have suggested that maintenance of a level of 25[OH]D >30 ng/mL may be required. However, the optimal 25(OH)D concentration is controversial and several ideas have been put forward about what constitutes vitamin D deficiency, sufficiency, and insufficiency. There is general agreement that vitamin D is only toxic at exceptionally high levels with toxicity not reported even in people taking up to 20, 000 IU/d.

Vitamin D supplementation
The current RDA for vitamin D as shown in the figure does not take into account body mass index (BMI) or absolute body weight, both of which affect vitamin D requirements. More obese individuals need more vitamin D than those of normal BMI. Supplementation with either vitamin D2 or D3 is effective in maintaining serum levels. The requirements for vitamin D are even higher in pregnancy (see figure). 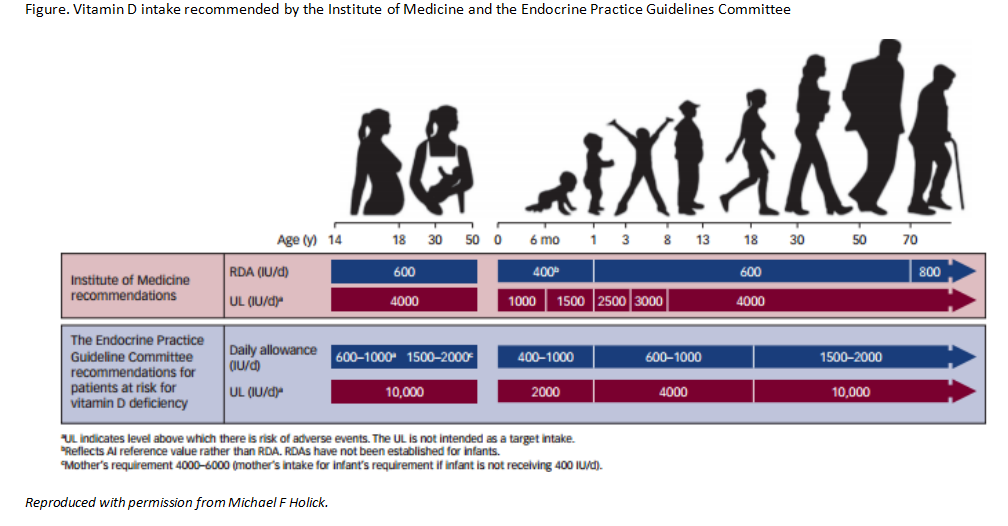 How is vitamin D involved in multiple sclerosis?
There is considerable evidence to indicate that vitamin D has a protective effect in multiple sclerosis (MS). The risk of MS is reduced with sun exposure, vitamin D supplementation and high serum levels. The levels of the vitamin D metabolite, 25[OH]D, are lower in relapsing-remitting MS (RRMS) than in people without MS and are also lower in patients with MS who are experiencing a relapse compared with those who are in remission. In a 20-year study of two large groups of women (one with 92 253 the other, 95 310), those who had been receiving vitamin D supplementation were at a lower risk of developing MS than those who had not received the supplementation. In addition to lowering the risk of developing MS, there is evidence that vitamin D affects the clinical course of the disease. This means that vitamin D insufficiency should be recognised and treated as early as possible in the course of MS. Studies have found links between higher levels of vitamin D and decreased risk of MS activity (as assessed on brain imaging) and decreased MS exacerbation, as well as diminished disease progression. In one study of 465 patients investigating the MS treatment, interferon beta-1b, low 25(OH)D serum concentration in treated MS patients put them at higher risk from disease progression over 4 years compared with patients who had higher 25(OH)D levels (that is levels of 50 nmol/L or greater). In an Australian study of 178 patients with clinically definite MS (CDMS), interferon beta-1b therapy was associated with greater production of vitamin D from sun exposure. This suggests a benefit for interferon beta-1b therapy on vitamin D metabolism.

Support: This project was supported by an educational grant from Bayer.

A lay summary on the relationship between vitamin D and interferon beta-1b in the treatment of multiple sclerosis can be found HERE.