Multiple sclerosis (MS) is a neurological disease of uncertain etiology, although both environmental factors and genetics have been implicated.1 There are a number of therapies licensed to treat MS that delay the disease progression, stabilize MS-related brain changes, and reduce the symptoms. The microbiome is the interaction between the host mucosal surface and the microflora that inhabit that space. All complex living organisms (plants and animals) have microbiomes. There are several microbiomes in humans including gut, lungs, vagina and oral. In humans, the microbiota is the population of microorganisms that have colonised particular anatomical sites in the body. Microorganisms (bacteria, viruses, fungi and archaea [an ancient single-celled microorganism without a nucleus or organelles]) are found on most mucosal surfaces in the human body, outnumber human cells by at least 10-fold and encode over 100-fold more genes than the host genome. In the gut, the microbiome is comprised of trillions of these various microorganisms that inhabit that space. The gut microbiota is the most important anatomical niche and is a major immune organ in humans being responsible for many beneficial effects. In the healthy mammalian body, Firmicutes and Bacteroidetes are the dominant phyla. Dysbiosis occurs when the balance of the gut microflora is altered. As the gut is the major immune organ in our body, changes to the microflora can lead to alterations of the immune system such that it can be either anti-inflammatory or pro-inflammatory. In the latter, the shifts of the microflora can lead to a disease state especially auto-immune conditions, such as, MS and also intestinal and systemic disorders including Alzheimer’s disease, Parkinson’s disease, and stroke.

The microbiome and multiple sclerosis

Numerous studies in patients with MS and animal models of MS have shown increases in some phyla and decreases in others compared with healthy controls (Table 1).1–8 There is compelling evidence to suggest that MS is affected by the composition of the gut microbiota.2–5 It remains uncertain as to whether the disease state occurs in response to alterations of the microflora or alternatively, the disease state renders the gut microbiome dysbiotic. This is an important consideration as the former situation would drive disease and the latter being due to responsive changes in the gut to the disease itself. 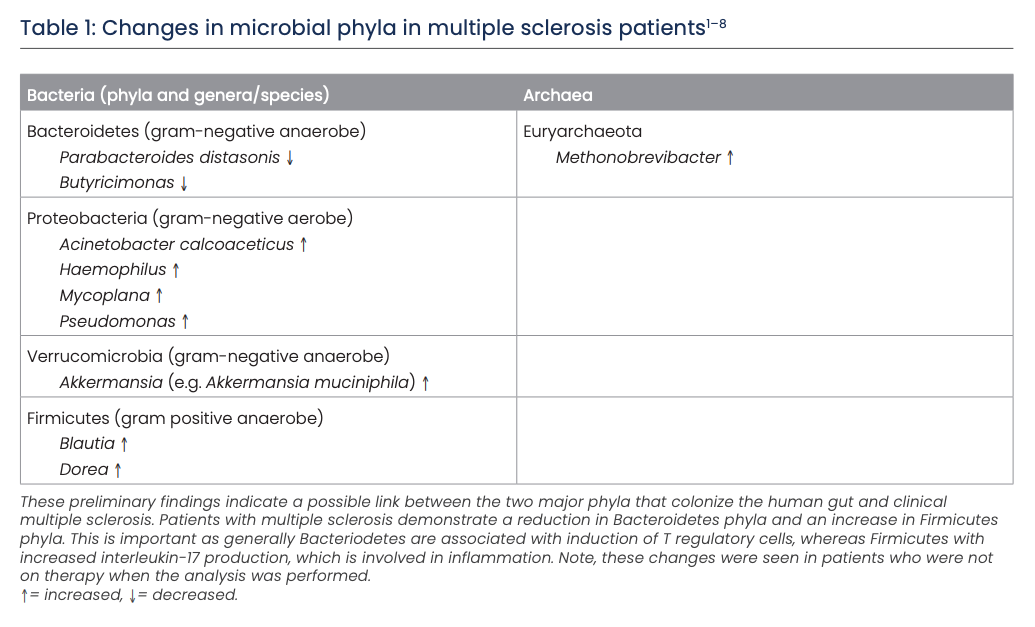 Studies have indicated that the abundance of some bacterial species that promote immunosuppressive T regulatory cells is reduced in patients with MS.9 T regulatory cells play an important role in modulating and suppressing the immune system and reduce self-reactivity that occurs in MS and other autoimmune conditions.9 Some studies have shown that although people with MS appear to have a virtually normal level of circulating T regulatory cells, they seem to be dysfunctional and fail to suppress both the proliferation of pro-inflammatory cells and the secretion of pro-inflammatory cytokine.10 It has been suggested that since the gut microbiota is involved in the regulation of tolerance mechanisms and is considered a major environmental risk factor for central nervous system demyelinating diseases, such as neuromyelitis optica and Alzheimer’s disease, amending the gut microbiome may be a safer strategy for treating MS.6 Furthermore, changing the gut microbiome could be complementary to disease-modifying therapy (DMT).

Results from studies of DMTs in MS have suggested that the microbiome may have a role in their efficacy. People with MS treated with interferon beta-1b (IFNβ-1b) showed significant differences in Firmicutes, Actinobacteria and Lentisphaerae, and six other bacteria phyla, suggesting that improvement in these individuals may be due to the effects of IFNβ-1b on the gut microbiota.2 In a mouse model of MS, treatment with teriflunomide caused an increase in regulatory T cells indicating that they may contribute to the efficacy of the therapy.11 Similarly, in both a mouse model of MS and in patients with MS, treatment with alemtuzumab increased regulatory T cells.6,10 Furthermore, glatiramer acetate or dimethyl fumarate treatment reduced the abundance of common bacterial groups in people with relapsing-remitting MS (RRMS).12

Probiotics are products that contain an adequate dose of live microbes that have been documented in target–host studies to confer a health benefit.13 A prebiotic is a substance that is selectively utilised by host microorganisms, stimulating their growth and conferring a health benefit. The probiotic VSL3 comprises eight bacterial strains and when administered to patients with RRMS induced changes to the composition of the gut microbiota associated with an anti-inflammatory peripheral innate immune response.14

Dietary factors could ameliorate or exacerbate MS symptoms in RRMS by controlling metabolic and inflammatory pathways in cells and changing the microorganisms in the gut microbiota. The major environmental factors such as geographical distribution, low vitamin D and high body mass index, which are associated with MS, can all be linked to diet and lifestyle. High calorie diets, typical in the west (high in salt, animal fat, red meat, fried foods), together with limited exercise, up-regulate the metabolism of human cells towards the production of pro-inflammatory molecules that cause adverse effects, which alters immunity in the intestine and contributes to low-grade systemic inflammation and dysbiosis. In contrast, diets with lower calories (and increased consumption of vegetables, fruit and legumes) together with exercise have a beneficial effect by the up-regulation of oxidative metabolism, down-regulation of pro-inflammatory molecules synthesis and restoring or maintaining a healthy gut microbiota.15 Of the known risk factors in MS, all can be associated with alterations in the gut microflora. However, as noted above, it remains uncertain as to whether these changes associated with the various risk factors are consequential of the disease state or causative.

The effect of diet and treatments on the microbiome

Probably the most significant change in human biology over the last 200 years has been in relation to diet, which has an important effect on the microbiome. Several studies have shown that MS DMTs can alter the microbiota.11,16 For example, in patients with RRMS treated with glatiramer acetate or dimethyl fumate, the numbers of a common group of bacteria were reduced suggesting that inhibiting or altering these bacterial populations could contribute to the efficacy of the therapies.12

What is the significance of the microbiome for people living with multiple sclerosis?

In the last 10 years it has been realised that the microbiome is an important organ in all living creatures. We are on the forefront of understanding for a new wave of human biology that may lead to a wide range of therapies that will revitalise the dysbiotic mucosal surface. This could occur with the use of probiotics, prebiotics or recolonisation of the gut with normal gut microorganisms. As more is learned about the effects of dysbiosis in MS it may be possible to develop better and safer therapies. The opportunity to treat a human condition such as MS with therapies that do not destroy, or significantly and irreversibly alter, the immune system could set a new standard for treatment. Alteration of dietary habits in association with other non-invasive techniques has the potential to manipulate the gut bacteria and reduce the dysbiosis associated with the disease state. A significant part of future human biology may be an understanding of how to beneficially readjust the trillions of microflorae within each of us leading to better health.

Support: This activity has been sponsored by Bayer HealthCare Pharmaceuticals. This activity is provided by Touch Medical Communications (TMC) for touchNEUROLOGY.

Lecanemab: The Price of a Breakthrough